One of my best Steam friends, who goes by the handle "Pike", has become an official contributor to MSS!

I originally met Pike years ago through Team Fortress Classic, where we murdered the crap out of each other. Our friendship grew to include our mutual interest in development on the Source engine. We have gone back and forth on our development ventures, occasionally going so far as to team up for potential mods.
He has many years of experience as a modeler, and has begun producing props for MSS during breaks from his primary project at the moment, which is a killer Left 4 Dead 2 campaign named "High Died". The first map is complete, and he is currently in plans on the development of map 2!

Already committed to the MSS files is his treatment of the braziers in the Temple of Urdual!

Difficult to see from this shot, but there are actually 2 different skins, one for the dark side, and one for the light, reflecting the various states of decay each would be in based on the energy that has been feeding the flames for so long!

Currently in production, as he allowed me to talk him into doing a weapon, is an awesome dagger. Here is a concept shot currently being 3-Dimensionalized!

Join me in welcoming Pike as an MSS contributor! No telling how many props in the release versions will come from his hand!
P

Happy to help when I can!
Here's the finished view model: 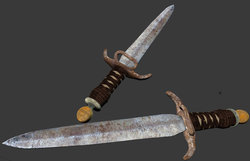 Will create a lower poly version for world model soon.

Kudos for posting updates off the actual progress in the mod.
P

I'm not sure just how interested anyone is in the technical side of the modeling/development.
I got the LODs (lower resolution versions that show from a distance to improve performance of the game) and thought I'd share a couple quick screenshots. You can notice that from a distance they look almost the same, even with much fewer polygons (tris.) (3640,1214,438 tris) 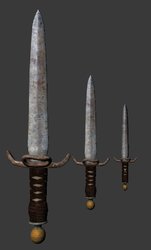 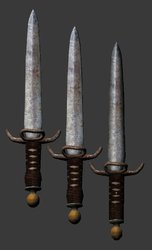 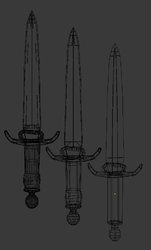 Edit: Perhaps I should be putting these in a new thread.

Impressive... All well within the realm of poly count for even Goldsrc, and still all look purty.
P

Thanks! The texture can really do a lot. This dagger doesn't have a bump map, and I don't think it'd really needs one too badly. Omitting them now and adding them later (if need be) could speed things up, I feel, as it takes some time to make a good normal map.

Well, if you're using photoshop and have the nvidia plugins, there's always the quick and dirty normalmap method.
P

That's actually the method I usually use. It just takes some time to tweak each of those layers by eye, and sometimes I find that the desaturated defuse doesn't give you exactly what you want, so I end up painting some areas by hand first.

It certainly is a nice way to do it without having to bake normals off of a sculpt or high res model. I hadn't seen that particular tutorial on it, thanks for linking that. The video they show there with parallax mapping in UE3 looks outstanding.

Maybe I'll do one for the dagger and post a shot. It certainly is nice to have. The dagger took me about a day to do, so I was looking to cut some corners. lol
C

I'd heard about crazybump. Just tried the demo, and it seems to work pretty well, with all those detail sliders and stuff. I bet it would work a dream for most models.

For the dagger it didn't do a perfect job. Did almost nothing for the leather wraps and made the blade look like stone. I'll probably have to make one by hand for this model at least.

ShaderMap2 is the other similar product I looked at. Looks just as capable (if not more) and the cost is about $40 as opposed to $100. http://shadermap.com/home/
C