This week, monthly’ish developer blog instead of the usual poll.

Progress has been, somewhat intentionally, slow, but I suppose we have elf and dwarven viewmodels to show.

Lackluster placeholder, but gets the point across until we get a modeler who can put a finer point on it. Viewpoint is also adjusted via a script that also will hopefully give us a more cinematic opening for new characters, though having one's eyes lower to the ground does provide the illusion that the dwarfs move faster, as one would expect.

Also hoping to give us more breathing room in the model count overhead by merging more viewmodels. That may involve remaking some animations from scratch, but we’ll keep those fancy dagger animations one way or the other. Would like to add skins for the armors, but it would cut too much into the texture overhead, however, we will leave a placeholder system for it in case we ever get around that.

Already spoiled this, but we’re changing how attacks work a bit: 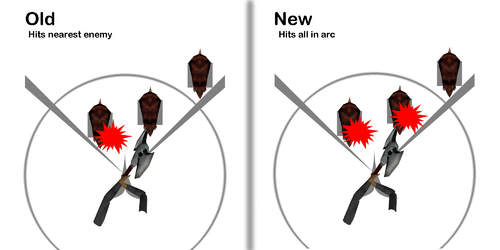 While we lack the ability to add a true weapon collision system, some weapons will be able to hit multiple targets in a single swing. The actual effect is done via a cone and reach. Don’t have a video of it in action, sadly, as we’re not going to really be combat ready until the monster bases are redone at least far enough for the rats. Most weapons will also feature some level of knock-back, though usually just enough to add feedback.

Considering making the Bloodstone Ring effect on by default, though then one would need a cvar option to disable it.
You must log in or register to reply here.