The ship as sunk, we no longer sail the open waters. Maybe someday a new pirate captain will emerge and take up a ship and sail the dread wind seas.

the powers of the FMU and PoE have joined forces.
With the might of the two powers combined we created: 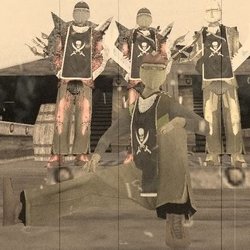 We are a Pirate guild! We are of course chaotic, but we have been known to help people for the right price. Once in a while we ban together for some pillaging and plundering, Sparing no life, killing all that is killable.

-we are the pirates of Dreadwind, fear us for we are the black plague.

Alliances
BoU - The Blades of Urdual
RiP - Rest in Peace

Joining The Pirates of Dreadwind
If you are interested in joining our ranks, please pm me or leave a post in this thread with this information

- a request to join
- in game name
- current level.
- Must have forum account, and be active.

All new recruits will start with the title Landlubber, after one week you will move from Landlubber to a higher rank depending on your level, you will also be presented with a crest to signify a true member of the crew. I will not be keeping up on what level you are, if you wish to have your level changes reflected here you will have to keep me updated.

Guild Rules
ye must be an active player - Yarr, ye be considered active if ye post once in a while in the forum.

ye will follow orders of your superior - yarr if a higher rank says jump ye better say how high. If ye finding abuse in power tell me, I be sure to put a stop to it.

ye cannot return if ye be exiled or abandoned - Ye be no longer allowed to return to the crew once ye leave it. I will make exceptions for some players if they be wantin back.

1. Anyone can recruit, it just has to be cleared by a leader. 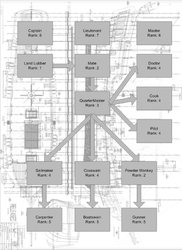 More information:
I have set up a multi tiered leveling structure, Quartermaster has 6 paths you may choose from, 3 of those paths have a limit on the number allowed on the ship.

So when you reach quartermaster state what you rank up next in is your choice. You will have to keep in mind that Doctor, cook, and pilot don't actually reach any higher state, however they have a limit to the number allowed. This makes your title more unique, for those pirates who prefer a unique title over a high ranking one.

Now if you did take one of these titles then decide later you wish to be a poweder monkey, sailmaker, or a coxswain I will allow this.

Once your title is changed you can start working your way up the food chain to the highest attainable rank in that category. I will not however allow a Carpenter, Boatswain, or Gunner to drop down to a rank with a limit set, its only one way, a limit rank can go to a non limit rank, but a non limit rank can not become a limit rank. UNLESS coming from Quartermaster.

Suppose not, but I need 5 members to post in this thread.
J

I R confused though - FMU just sent me a new crest, so umm... Are they still joining forces wid you? Not that it matters until I get three more members posting in here anyways.
B

I R confused though - FMU just sent me a new crest, so umm... Are they still joining forces wid you? Not that it matters until I get three more members posting in here anyways.
Click to expand...

Rather I did, New link up for FMU!

LONG NOT DEAD! PRAAAAAAAAA.
B

FMU did join up with us, however Biorag went a brought it back. So I guess the union between the two guilds is sort of gone, but the fact remains the two active members have joined up with the newly formed pirate guild.
Z

I have a request of guild members

please get the other guild members to post in here, the sooner they post the sooner we can have a crest.
J

Better get two more posters before Febuary, or you'll have to wait another month.
B

guess I will have to torture my cousin in order to get him to post in here, and if I could hunt Villager down I would... Hmmm I thought lockdown was going to post in here... Yarr tis the pirates way lie to the capt`n.

The hunt is on.

You have 10 hours remaining.
B

I am so sad I just need vomica7 aka loki to post in here...

and lockdown failed me!
C

I am a meber of the guild!....he just told me to post anything thing and here is anything
B

where did I put that tracking device
V

Alright! we have our members!

sweet now we can get our crest! 8)

Lol, alright, amazing how a deadline motivates... I think I would up giving you an extra 5 hours anyways.

I'll be PM'ing ya something momentarily.
J

omg, we can have our crest!

I hope to see you guys around (and fight those black christmas puddings!)

I now have a whole lota crests, I am ready to hand them out! If I happen to see you playing in a server I will give you one otherwise look for me. If you would rather set a time to get one please state a time to get it and I will see if I can meet you in game at that time.

ill be going to your server more often then blasto
J

Unlike the BoU landlubbers, we've got better things to do than take group shots to show that we're alive.

Oh, and we earned our first merc job:

We've turned them bandits into hobos!

Yeah, it's pretty funny that I can see not just one, but two Blades in your guild screenshots

...which testifies how amazingly active we are! We don't even need to take guild pictures, others do it for us, since we're everywhere.

Haha! 8)
You must log in or register to reply here.

The Shadows of Torkalath » 15 Members
2